Brain function can be affected by a number of factors.  The acronym “STOPEATS” sums up the physiological factors that can affect brain function changes.

Depending on where you work and play, you’ll encounter some of these factors more than others – but all of them are time-sensitive, and potentially life-threatening, challenges.  Using the STOPEATS acronym may help you get to the root of the issue quickly, so that treatment can get underway.

Get familiar with each of the factors of STOPEATS with these stories from the field, and get hands-on treatment practice on your next Raven Medical course.

It was an unrelenting six-hour hike, without a tree in sight for shade.  The scree-covered mountain reared towards a pulse-quickening third-class scramble to the summit, a panorama of glaciers and valleys stretching in every direction.

Rachel had eyed the mountain from town for her entire childhood, and she was finally going to take in the view from the top.  Her hiking partner, Maggie, set a moderate pace that would take them to the summit in time for a late lunch.  But somewhere around mid-morning, Rachel realized that the shakiness in her legs wasn’t just from the endless uphill march.

“I’m a Type 1 Diabetic, and I’ve had this feeling before,” Rachel explains.  “It get really hungry, and my body feels really weak and shaky.  When my blood sugar gets really low, I actually have a hard time processing thought.”

The challenge is that the onset of her symptoms are so gradual that Rachel doesn’t even realize she’s hit rock bottom until she is dangerously low. And that’s where she was this time – low. Dangerously low.

“I had to sit down, and power eat an orange and a granola bar until I felt like I could move and think properly again.”  It took about fifteen minutes for Rachel to feel herself again before she and Maggie continued their way up the mountain.

The likely issue that you’ll encounter in the backcountry surrounding sugar is a low-blood-sugar incident for a diabetic.

Diabetes is a condition where individuals can’t make enough insulin, or can’t make any insulin at all, or can’t use insulin properly in their bodies.  Insulin helps our bodies convert sugar into usable energy, and diabetics manage their condition by medically controlling the amount of insulin in their bodies.

Diabetics need to maintain a fine balancing act between their blood sugar, medication, and activity; too little insulin, and their blood sugar will skyrocket; too little sugar, and they end up in Rachel’s situation. Running on a small snack during a strenuous hike may not seem like a big deal to the average person, but its a recipe for danger for a diabetic.  Skipping meals and heightened stress or activity, coupled with regular insulin medication intake, may put a diabetic person into a state of low blood-sugar (or hypoglycaemia).

Most diabetics are excellent at managing their condition, so your role as a first aid practitioner is to support them as needed if they tip the scale to either side in the blood-sugar/insulin balance.

It is worth noting that even people who are not diabetics can experience mental changes from low sugar. While these changes aren’t a threat to life, a hangry hiking partner may be a threat to morale…!

Chris and Avneet were pulling their packs from the back of their Toyota Matrix, speculating about the condition of the trail this early in the summer.  There was a section that remained persistently marshy into August, and it had been a wet spring.  They were lamenting about how wet their boots would be by the time they hit their campsite that evening, when a 30-something male wobbled towards them out of the forest.

He was alone, and they could see a small sedan parked behind him, further on in the parking lot.  He was wearing hiking clothes, but this guy didn’t look like he was in any condition to go hiking.

Chris lowered his backpack and peered closely at the guy, whose eyes were roaming frantically around the surrounding forest. It only took a little bit of probing for the guy to eventually admit that he was on a mushroom-trip-gone-wrong.  Chris ushered him into the backseat of their Matrix and headed to the town’s hospital, while Avneet drove along behind them in the patient’s sedan.

There are four big ways to encounter toxins in the backcountry:

In general, dilution is the solution.

Roy and Calvin had plunged into their tent as soon as they got it up. It was pouring rain, and they couldn’t stand the thought of slumming it under the cook tarp with the rest of the group to cook their rice dinner.

The vestibule was packed with wet boots, so the guys set up their Whisperlite in their tent.  Dinner was starting to smell delicious, but the guys weren’t feeling terribly great.

“Maybe you didn’t drink enough today,” Roy theorized as he stirred the rice. “I feel like I’m coming down with a stomach bug though, so maybe we’re both just getting sick.”

Dizziness, headache, nausea… classic symptoms of CO poisoning, which is a potential result of cooking inside a tent that’s been zipped tight to keep out the cold.

When considering this letter in the STOPEATS acronym, be on the lookout for anything that may be reducing oxygenation to the brain.

When it comes to pressure in the STOPEATS Acronym, be on the lookout for something that has caused pressure inside the skill to increase, or pressure within your vascular system to decrease.

A drop in blood pressure will be due to some kind of shock.

An increase in pressure inside the skull could be due to many different things (in fact, the anticipated problem of “rising intracranial pressure” is associated with a number of the other STOPEATS elements on this list!), but there are two standout causes to keep on your radar in the backcountry: stroke, and traumatic brain injury.

Both strokes and traumatic brain injuries may insult the brain tissue to such an extent that it begins to swell.  This swelling (also known as cerebral edema) creates an increase in pressure inside of the skull.  It is not a condition that a body is designed to maintain, and needs to be treated professionally.

“We were climbing this alpine route called the Abraham Shoulder in the Rockies.  You’re just fully exposed to elements when you’re on a rock face like that, and the Rockies are known for their afternoon electrical storms.”

Climber Jessica Ferrara still gets spooked when she recollects what happened that afternoon on the Abraham Shoulder.  “We’d been climbing since four o’clock in the morning, and we could clearly see the afternoon’s clouds building.  Even though the activity seemed to be across the valley, my partner noticed immediately when my hair started standing up on end, and my ice axe starting vibrating against the cams on my harness.”

When you get to the letter E in the STOPEATS acronym, think lightening.

Lightening is the most likely source of electrical activity in the backcountry that can produce a brain function change.  The electrical current of a lightening strike enters the brain directly, and essentially “cooks” brain cells.

HACE (or high altitude cerebral edema) is a condition where the brain swells with fluid because of the effects of travelling to a high altitude. At altitude, a climber’s prolonged exposure to the reduction in air pressure results in less oxygen making its way to their brain.

HACE is often (but not always) preceded by Acute Mountain Sickness (or AMS), and is often associated with high altitude pulmonary edema (HAPE).  Elevations as low as 8,000 feet/2,500 metres can trigger AMS symptoms in climbers.  Taking time to acclimatize can help prevent AMS, but AMS has been known to strike even seasoned climbers who have been at altitude many times before.

The Dickson family had been planning all season for their summer raft trip down the Kootenay, and they weren’t about to pull the pin just because the thermometer had hit 42 degrees Celsius.  But by day three on the river, the heat was taking its toll on the entire family.

9-year old Sam and 11-year old Bethany had to be constantly reminded to drink water and eat small snacks.  The heat was oppressive, and their appetites were small.  When they eddied in to the beach to set up camp, Bethany lazed in the raft until her little brother complained she wasn’t moving her fair share of the group gear.  She stood up,  and it was immediately clear something wasn’t right – Bethany stumbled from the raft, swaying.

“We went to her right away,” Bethany’s mom recalls. “We put her in the shade, gave her water, and a little bit to eat.”  Bethany stayed put while the family finished unpacking the raft. She came around slowly, but went to bed early, still feeling a little off.

The brain is designed to function within a narrow thermal band.  Get it too hot, or too cold, and you’ll begin to see brain function changes.

In the backcountry, hot temperatures are an obvious contributing factor to heat-related brain change.  But don’t strike this STOPEATS factor off your list just because it is cold out – something like wearing too many layers could create a micro-climate that puts a subject’s internal temperature over the tipping point.

And while the brain can function within a greater ranger of cold temperatures, the “Umbles” are a sure sign that things are getting a little too chilly.  When your hiking partner starts stumbling, mumbling and bumbling around, that’s your first clue that they’re hitting the low range of their safe thermal band.

Brenda’s friends watched her topple sideways with her mountainbike.  This piece of terrain was benign, and she lay in a crumpled heap with her bike on the flat ground as they rushed to her side.

A moment later, her eyes fluttered open.  She’d blacked out momentarily, and her friends told her what they’d just witnessed.  Brenda had her Wilderness First Responder, and she had a feeling she knew exactly what was going on.

“I had them get a t-shirt wet, and I wrapped it around my head.  I relaxed under a bush for about 30 minutes, and then ate a little bit of salty food,” Brenda remembers.  She’d been drinking plenty of water, and wasn’t particularly hot, but she hadn’t been eating much and her electrolytes were low.  She felt terribly nauseous for a while after the fall, but recovered well enough to finish biking to the trailhead.

Exertional hyponatremia occurs because of drinking too much water, which dilutes the sodium concentration in the blood.  In the backcountry, this low concentration is likely to be due to excessive sweating combined with drinking too much water.  Hyponatremia makes subjects feel weak, dizzy, and nauseous. They often have muscle cramps and a headache, and they may vomit.

Hyponatremia due to excessive sweating, or drinking too much water, can be remedied with fluid restriction, and rest.

If you run in to brain function changes in the backcountry, turn to STOPEATS.

The STOPEATS acronym will guide you through the physiological factors that contribute to brain function change; it might just enable you to make a swift and accurate assessment when the pressure is on.

Learn more about STOPEATS during your next Raven Medical course. 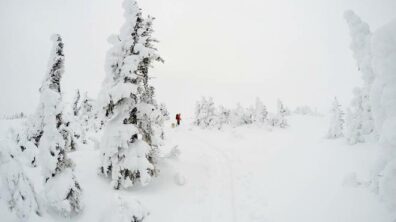 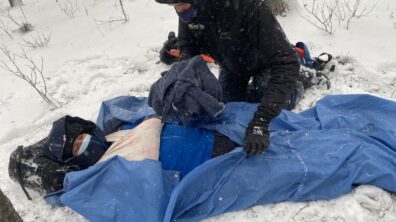 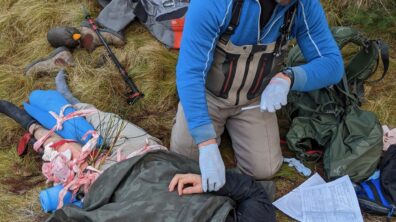