The Flood Legacy Bursary was established in response to the extreme flooding that occured in Alberta in June, 2013. Many emergency responders involved in the flooding event felt that the greatest challenge of the crisis was the effective and timely allocation of all available resources.

In an effort to ensure more emergency responders were prepared to deal with moving water situations, like river rescues and flood rescues, Raven created a Flood Legacy Bursary to assist smaller, volunteer departments and SAR teams obtain the right certification to operate safely during swiftwater and flood incidents.

This year, we extended the Flood Legacy Bursary to emergency responders across Canada.  Here are the stories of our 2017 recipients.

My name is Chelsea Scott and I am a firefighter with Kananaskis Emergency Services.

The vast majority of my experience with floods actually comes from before my time in Kananaskis. Prior to moving out here, I worked as a Park Ranger and called northern Ontario home. I lived in Wawa during their massive floods of 2012-2013.  The flooding started in October of 2012, wiping out sections of the trans-Canada highway and leaving the community an island. Homes that were located on Lake Superior experienced the most damage: cars and debris are still missing in the lake today.

Winter set in and everything seemed better, until things started to thaw again that spring. When I returned to my park (White Lake Provincial Park) at the beginning of May 2013, the vast majority of it was under water.

The opening that year was delayed by almost a month as we got things repaired, fixed roads, cleaned up downed trees and debris. I have seen some of my favorite places wrecked by flood waters and have been part of the crews to clean up the damage. The one good thing I have to say about my flood experience was the way that it brought my parks team together. We always made the best of it.

Moving to Kananaskis has been the best decision I ever made.  I have always loved paddling, having started my ranger career in a canoe, and I look forward to taking that passion for water a step further with swiftwater. Having taken my Ice Rescue tech course with Raven last year, I know the quality of training to expect and the level of experience brought to the table by your instructors.

My long term career goal is to become a member of the Public Safety rescue team here in Kananaskis, and I am working my way down the list of Raven courses to further those goals. When I became a firefighter, I started to realize just how truly amazing people are, and just how much we are capable of as a rescue team. I love helping people; there is something about seeing somebody on their worst day and helping them get through it, maybe even being able to make it a bit better.

Expanding my technical skill to include swiftwater emergency responder training fits my goals. I want to continue to get better, learn more and train harder to become the best possible first responder that I can be.

I am a Senior Firefighter / EMT with Exshaw Fire and have served with them since 2001.

I was active in the response to the 2013 Southern Alberta floods, tasked with providing medical care to residents, and ensuring the welfare of the people living in Exshaw during the flood. We had limited access to critical infrastructure, including gas, power, or ground ambulance transport during many stages of the event. At some points I was required to access patients by watercraft.

As you will see in the attached picture, this is before I had received any swiftwater emergency responder training – and thus was incorrectly wearing my bunker gear in a hot zone! This particular moment was captured by a colleague as I was enroute to perform an assessment on a resident who was pregnant with a due date less that 72 hours away. I ultimately evacuated her from her home by canoe and she was transported to a pick-up point that had been established for ground ambulances.

There were other incidents as well where I had to navigate flooded portions of the town to make patient contact.

I would very much appreciate the opportunity to develop my flood hazard rescue skills and share that knowledge with my department.

Learn more about the Flood Legacy Bursary (and sign up for an email reminder to apply!) 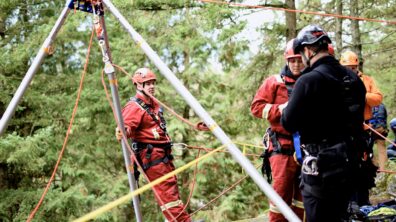 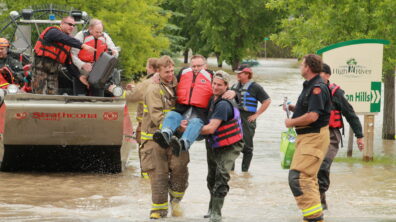