2015 marked the third year of the Flood Legacy Bursary. We awarded five recipients, each of whom brought a story of being challenged with flood rescue emergency response.

Here are those stories:

“As you are aware, the High River Fire Department was significantly affected by the Alberta floods of 2013. A number of our staff had received tech training in 2012, and we continue to grow in the number of staff that we have trained in this skill set. Preparing for the future will continue to keep our members safe.

Thank you for continuing to provide this bursary to flood affected communities.”

Vulcan Fire Department is a small yet mighty volunteer hall of about 17 members. I have been with VFD since I moved to Alberta from the Fraser Valley about five years ago, I’m also a PPC 1st class with the High River Fire Department, and my experience with the 2013 flood was from both departments.

With VFD, we were tasked with evacuations along the Little Bow River in Vulcan County. After that, we were in preparation mode getting ready for what may come down the Little Bow. The northern part of the county was hit by flooding, and we did what we could to ensure all the people in that area were safe. The first five days were spent doing the evacuations followed up by 24hr patrols along the river in the areas hit by flooding.

I have been wanting to get my SRT1 for some time now, and I really would have liked to have it during the 2013 flood. However, getting it now will leave me better prepared for flood rescue emergency response in the future.

On behalf of Mark Romaniuk, his training officer Jason McEwing submitted an application for the Flood Legacy Bursary. Jason provided Mark’s story as it was recounted in the Strathmore Times by reporter Aryssah Stankevitsch:

Whereas Calgary had roughly 10 hours to evacuate, High River was only given a 12-minute warning of the floodwaters. The Strathmore Fire Department was first on the scene, saving people trapped in their homes and from the tops of their cars. The military later arrived, followed by the RCMP.

“I’ve never been part of a huge flooding or seen anything like that before,” said Firefighter Mark Romaniuk.

“I ended up sitting with one of the victims. We just started talking, and we said to each other…it doesn’t matter if your house is worth $2 million or you live in an apartment, you’re still getting the exact same care.”

Romaniuk was working in a team with a High River Fire Department member, and a private diver, to try and assist those in need.

“It was hectic. It was definitely an eye opener. For me, it put into perspective on what you have in your life, and they just lost it all,” he said.

Strathmore Fire also aided Siksika and Carseland to help those trapped along the Bow River, but had to turn away assisting in Black Diamond and Bragg Creek.

In Fort McMurray we experienced the flood up here 2 weeks before southern Alberta did. As a member of the fire department we were required to go into the potential flood zone, and assist in evacuation of people from their homes. The hanging stone river and the horse river were both affected at this time. There was significant damage to a historical park, and a pedestrian bridge was knocked out as well, eliminating a means of egress for members of that part of the community.

I feel with the amount of precipitation that our region has received this season that we are again at a higher risk for flooding. Additional training in flood rescue emergency response will be a huge benefit to the members of the department, as well as those in the community.

I am currently employed with Alberta Environment and Sustainable Resources Development as a Hydrometric Technologist, and I was unfortunately involved with the 2013 flooding very early on. Coincidentally, three colleagues and I were scheduled to participate in a swiftwater rescue course in Canmore the day the rain and high water hit us – June 19, 2013.

Canmore was, perhaps, the first community to be directly impacted by the flooding. Working around high waters and floods is a reality of our profession, and ensuring our safety and the safety of others around us, has always been paramount.  We’ve always afforded the time to train properly.  However the timing of the floods, and the events that followed, could not have highlighted the importance of swiftwater training more.

That morning, our course was obviously cancelled (the conditions for swiftwater were overachieved), and by witnessing the destruction first hand in the surrounding area of Canmore, we knew the gravity of the situation.

We promptly arranged a helicopter, and by communicating with the river forecasting centre, we surveyed the damaged and manually obtained the most current water levels possible, as many of our gauges were destroyed or disabled by the historic torrent. We simply needed to disseminate information to allow authorities and engineers to comprehend the extent of the disaster. We had become the first line in providing the information the province required to carry forward and plan the emergency response.

Although we were surveying the extent of the disaster, we were conscious that people may have been endangered and required assistance, thus we were on the lookout at all times. Fortunately, we found none who required it.

As for myself, I’ve experienced floods, ice jamming events, and water related incidents beyond the 2013 floods. I am currently a member of the fire department and Canadian Coast Guard Axillary here in Fort Chipewyan, Alberta. This bursary will supplement my training for personal safety and awareness reasons, and allow me to assist whenever I can during water related incidents.

Learn more about the Flood Legacy Bursary, and sign up for an email reminder to apply. 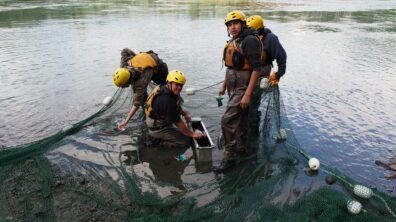 What About Waders In Swiftwater? 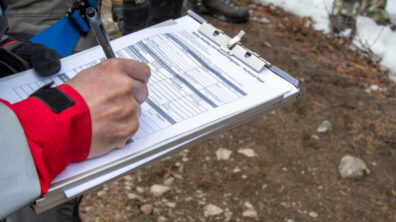 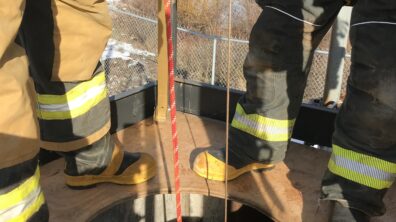